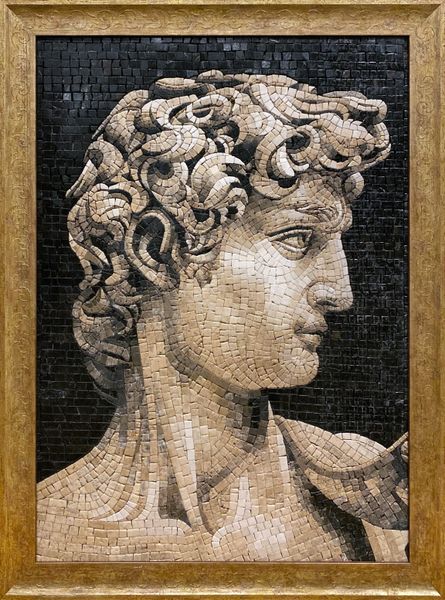 $1,399.00
Dimensions:
Quantity:
Looking for different dimensions or colors? Customize RE017

This mosaic is mounted on a wooden background and is framed as shown in the picture, it's ready to be hanged on a wall, no installation needed. David is a masterpiece of Renaissance sculpture, created in marble between 1501 and 1504 by the Italian artist Michelangelo. David was originally commissioned as one of a series of statues of prophets to be positioned along the roofline of the east end of Florence Cathedral, but was instead placed in a public square, outside the Palazzo Vecchio, the seat of civic government in Florence, in the Piazza della Signoria, where it was unveiled on 8 September 1504. The statue was moved to the Galleria dell'Accademia, Florence, in 1873, and later replaced at the original location by a replica. Because of the nature of the figure it represented, the statue soon came to symbolize the defence of civil liberties embodied in the Republic of Florence, an independent city-state threatened on all sides by more powerful rival states and by the hegemony of the Medici family. The eyes of David, with a warning glare, were fixated towards Rome. This is a handmade reproduction with naturally colored marble tesserae, sanded, finished, sealed, and framed. Hang it on the wall as wall art.

Our mosaic artisans are skilled at transforming mosaics and can skillfully transform your whatever on your mind into an unparalleled work of art.

Whether you seek to personalize RE017 or draw inspiration from a picture or nature, our team of designers are here to create the handmade, custom mosaic of your dreams.

Customize RE017 or Learn more about mosaic customization