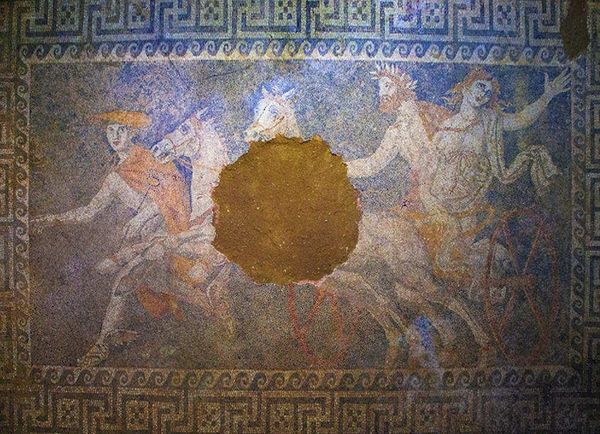 A mosaic of the Kasta Tomb in Amphipolis, 4th century BC

The Ancient Greeks developed a system for this style in the 5th Century BCE. This system allowed them to create artwork to be put into and around the home. Mosaic walkways and flooring became coveted by homeowners looking to dramatically uplift their interior designs. At first, the Greeks utilized a greyscaled color palette and focused on shape, texture, and composition. Later in the 4th Century BCE, the Greeks were able to process green and red pebbles that would inspire artists to produce more mosaic artwork.

While the Greeks and the neighboring Romans created new ways to make mosaics, artists in North Africa, Syria, Persia, and even the Ancient Americas created art with materials native to their respective regions. Egypt, known for its ancient art, saw one of the earliest uses of glass tiles in mosaics. Today, most mosaics consist of stone, marble, or glass tiles.

Marble tiles are especially favored in mosaic artistry as marble comes in a variety of colors that an artist can cut to their liking. Marble's inception into the mosaic world was a revolutionary change that allowed mosaics to go from functional home decor to artistic expression. Artists began to reconstruct world events and imagine new ones. Intricate ceiling displays became breathtaking features of churches and mosques. While sweeping, grandiose landscapes and murals crept into fashion and have stayed there to this day.

Mosaic wall art evolved shortly after the creation of mosaic walkways and floors. One of the earliest examples of mosaic wall art comes from Ancient Rome, specifically the city of Pompeii. The Alexander Mosaic found in the House of the Faun is an artistic depiction of the Battle of Issus. This great battle fought between Alexander the Great and Darius III of Achaemenid Persia was forever preserved in stunning mosaic form.

The Alexander Mosaic is vast and takes up the entirety of a large wall. Today, mosaics can be just as stately or more suited for the modern home.

During the Renaissance era (15th-16th Century), European homeowners opted for frescoes and recessed wall designs over mosaics, but this changed yet again during the Age of Enlightenment in the 17th and 18th centuries. In fact, during this time, mosaics were elevated from illustrative depictions of events to genuinely remarkable works of art that ranged from incredibly realistic, like the Baptism of Christ in Lisbon's Chapel of St. John the Baptist, to wildly abstract patterns that somehow blend harmoniously. Mosaics took on a reputation for showcasing artistry and skill.

As the world continued to look for new and innovative ways to make art, artists like Gustav Klimt were making mosaics that defied the traditional styles of the Ancient Greeks and Romans. Klimt toyed with different materials and rounded lines befitting his abstract take on Byzantine style motifs.

Modern-day artists use various materials, many of which are recyclable. It is not uncommon to see public mosaics constructed of broken glass or ceramics from discarded home goods and other waste. Traditional tiles of marble, glass, or pebbles are still in use worldwide in a variety of styles.

Gone are the days when only the richest few could decorate with mosaics. Today, mosaic wall art is not only accessible, but it is a timeless way to elevate your space.

A Timeline of Notable Mosaics 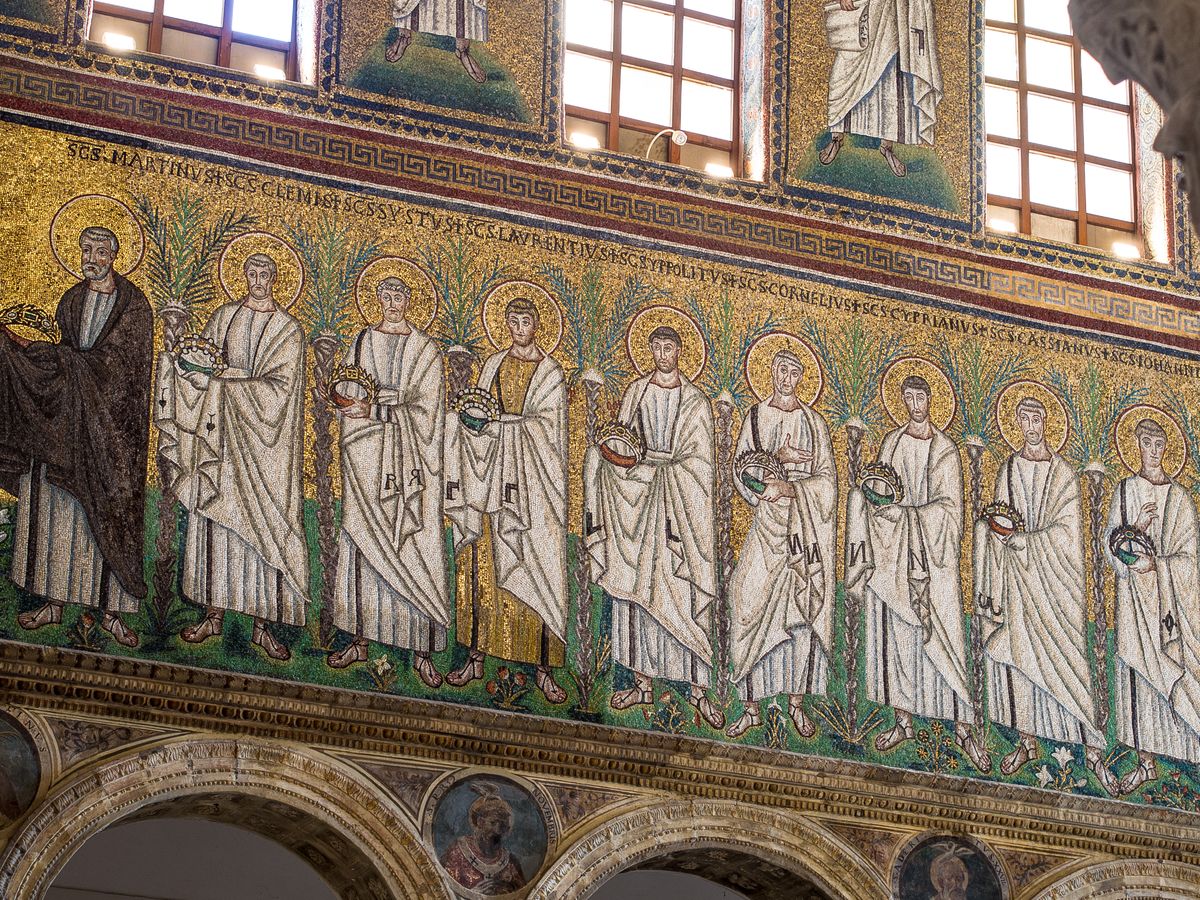 The Madaba Map is a floor mosaic in the Church of Saint George in Madaba. Originally made with over two million tesserae, this mosaic depicts a map of the Middle East, including Jerusalem, and is considered the oldest map representation of the Holy Land. 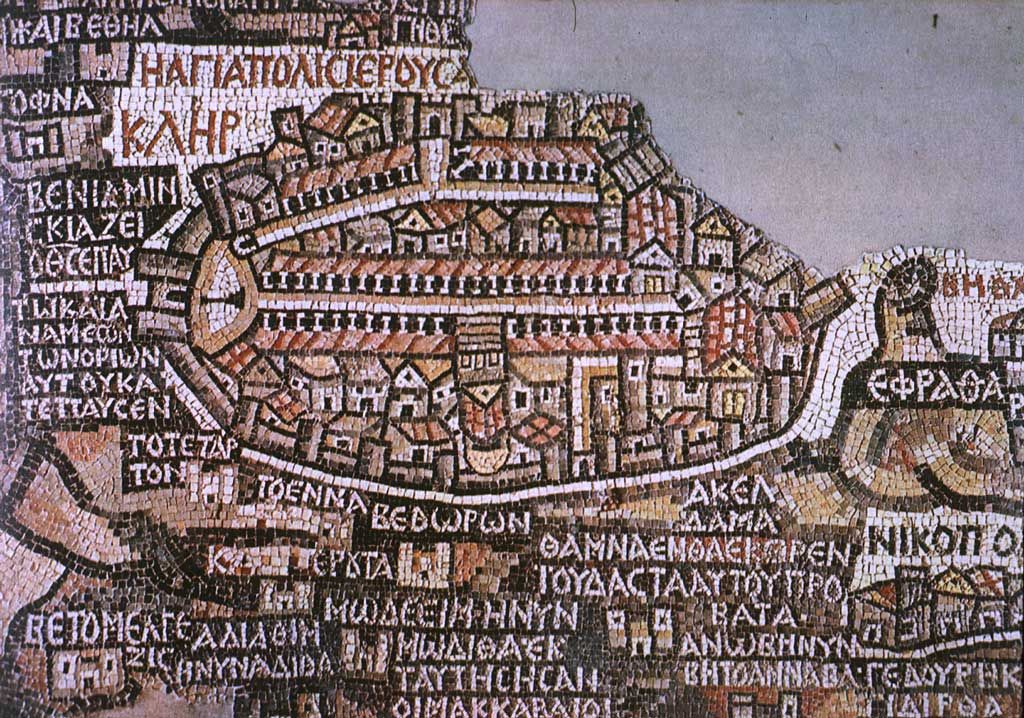 Located in the Hagia Sophia in Istanbul, Turkey, the wall mosaic, The Virgin and Child, is a beautiful example of Byzantine artistry. Mary sits atop a pillow throne while her son, Jesus, sits on her lap. Together they appear with spectacular gold details.

The Virgin and Child mosaic wikimedia 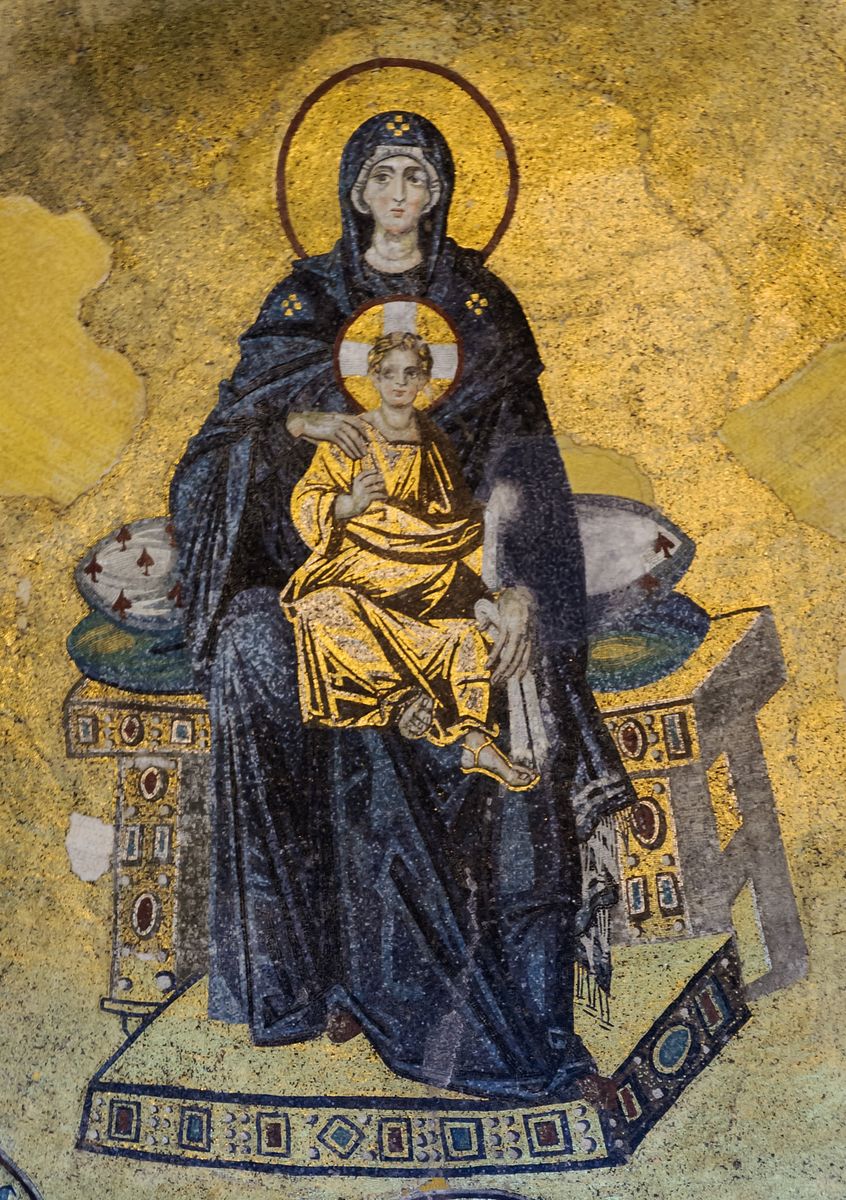 The Cosmati pavement is a recently uncovered floor mosaic within Westminster Abbey in London, England. This spectacular mosaic was constructed with a variety of high-end materials, including gemstones, rare marbles, and even pieces of other monuments. Though much of the lettering has not survived, the mosaic seems to predict the fate of various life forms like dogs, horses, and even humans. 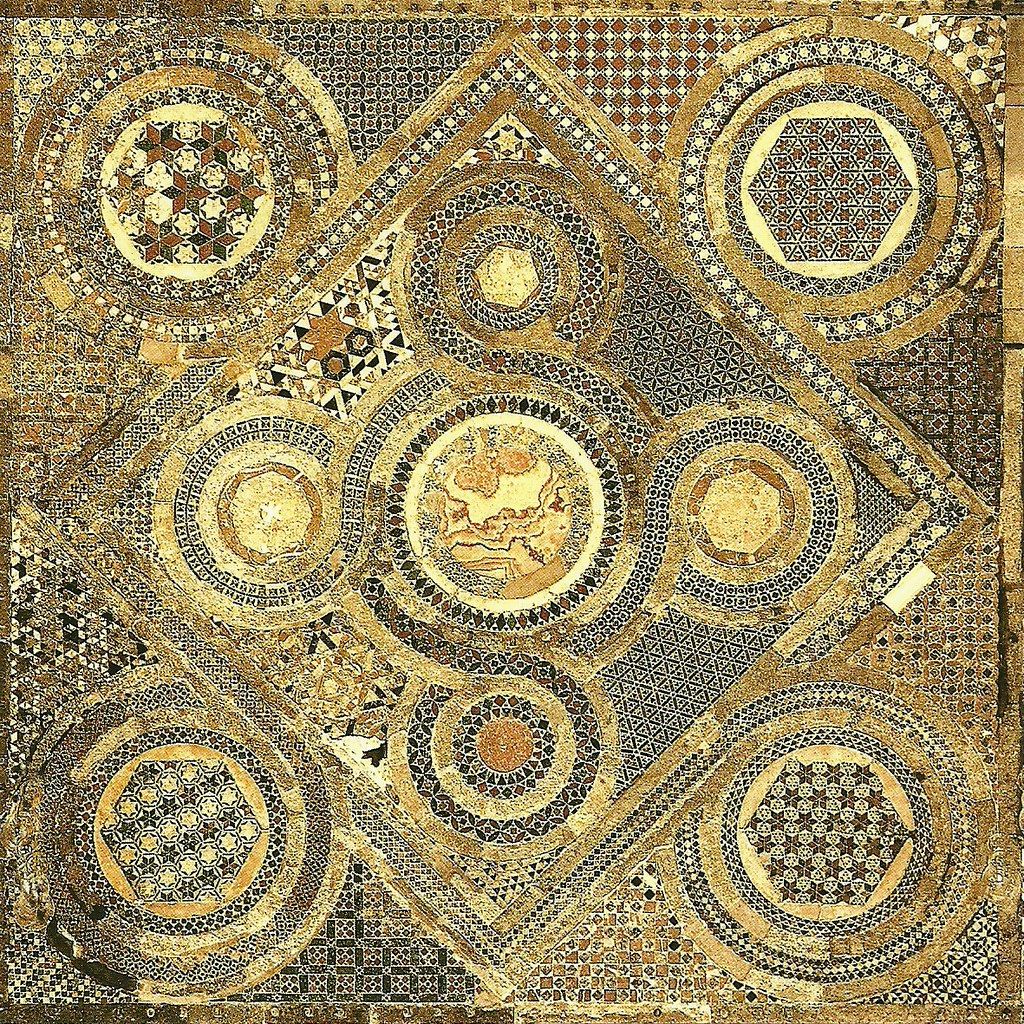 The Jameh Mosque of Yazd in Iran features a stunning mosaic exterior and interior. Its towering minarets and dome are entirely covered in vivid tesserae. The inside chamber received the same treatment with beautiful mosaic walls. 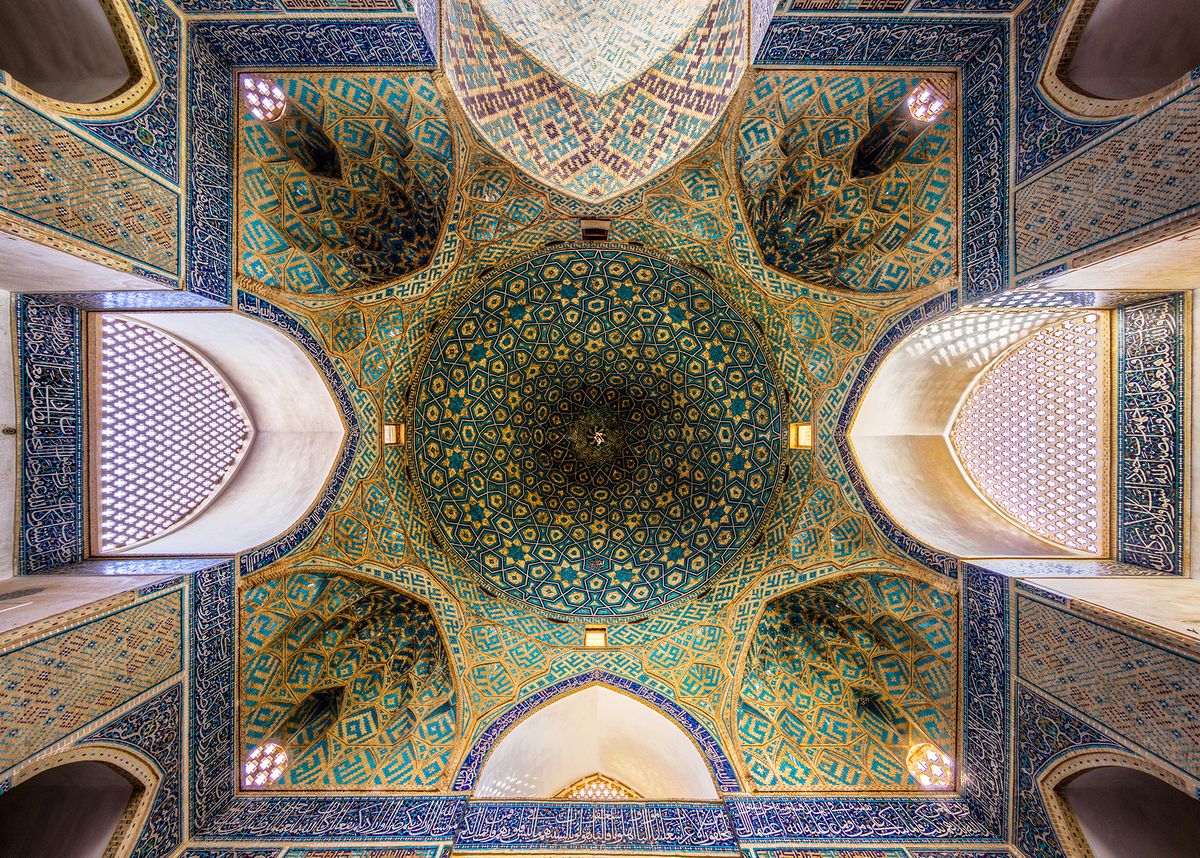 The Mask of Xiuhtecuhtli is an Aztec mask mosaic. Artists used hundreds of tiny pieces of turquoise to create a religious death mask depicting the Aztec god of fire, Xiuhtecuhtli. The mask itself would have been used in religious ceremonies, either worn by a figure playing the god or an effigy made in his honor.

The Mask of Xiuhtecuhtli flickr.com/photos/snarfel 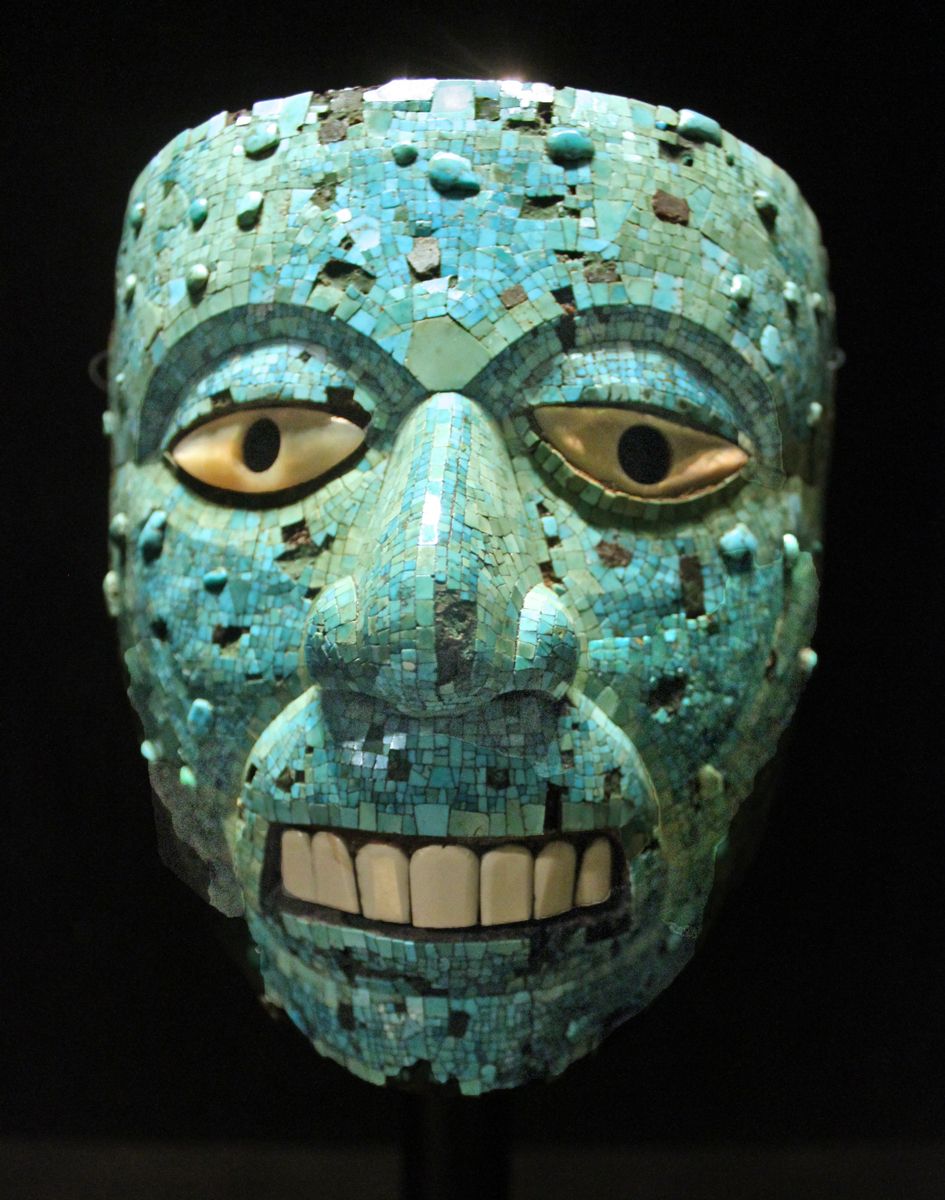 Some of the most engaging American mosaics can be found underground in the subways of New York City. This tradition began with the mosaic signs for each stop but grew to include large mosaic murals spanning entire walls. 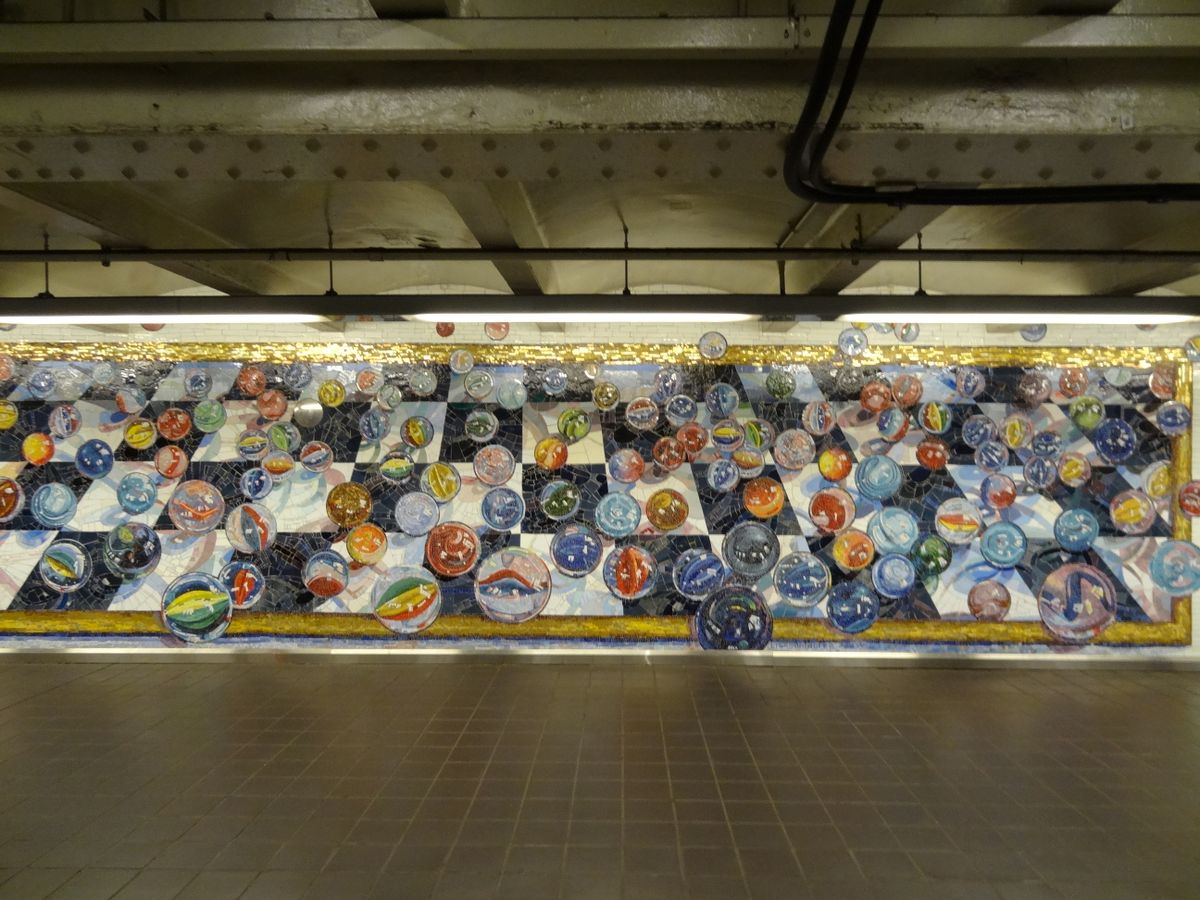