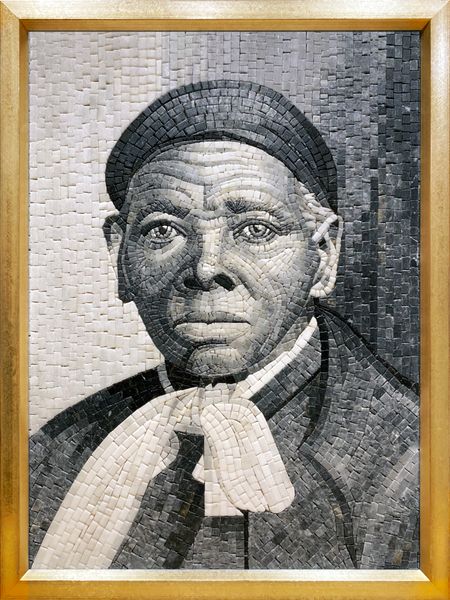 This mosaic is mounted on a wooden background and is framed as shown in the picture, it's ready to be hanged on a wall, no installation needed. Harriet Tubman was an American abolitionist and political activist. Born into slavery, Tubman escaped and subsequently made some 13 missions to rescue approximately 70 enslaved people, including family and friends, using the network of antislavery activists and safe houses known as the Underground Railroad. During the American Civil War, she served as an armed scout and spy for the Union Army. In her later years, Tubman was an activist in the movement for women's suffrage. We made this mosaic in homage to Harriet, handcrafted with naturally colored marble tesserae, sanded, finished, sealed, and framed. Hang it on the wall as wall art.

Our mosaic artisans are skilled at transforming mosaics and can skillfully transform your whatever on your mind into an unparalleled work of art.

Whether you seek to personalize PT120 or draw inspiration from a picture or nature, our team of designers are here to create the handmade, custom mosaic of your dreams.