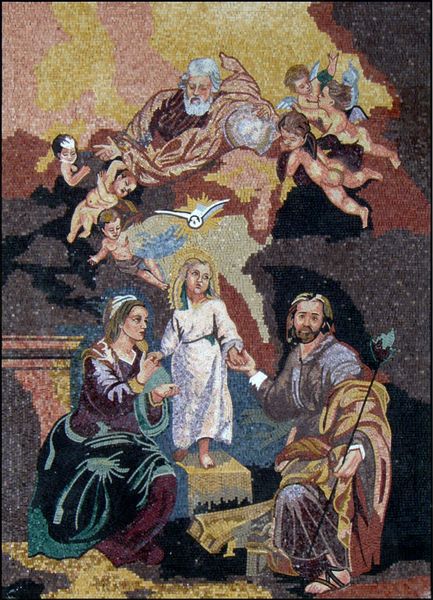 The Two Trinities Mosaic Art Reproduction. Murillo was one of the leading artists in seventeenth-century Spain, surpassed in his lifetime only by Velázquez. Both artists were from Seville, but their temperament, careers and critical success could hardly have been more different. Velázquez spent the greater part of his life at court in Madrid. Murillo remained in Seville, painting mainly religious subjects for pious foundations; his death was the result of a fall from a scaffold in the Capuchin church in Cadiz. His secular paintings included a few masterly portraits, but otherwise consisted almost entirely of scenes of childhood, an unprecedented genre in Spain. 1675-82, Oil on canvas, National Gallery, London. Handcrafted from naturally colored marble tesserae, sanded, finished, and sealed. Install it on your wall as wall art or a mural.

Are you looking for specific dimensions or colors? Customize PT068

We can customize this mosaic and any of our mosaics. We also offer completely customized mosaics based on your own unique photographs and designs. Our customized mosaics are one-of-a-kind works of art that can be ordered for you, your business, or your loved ones. Customize and build your own mosaic